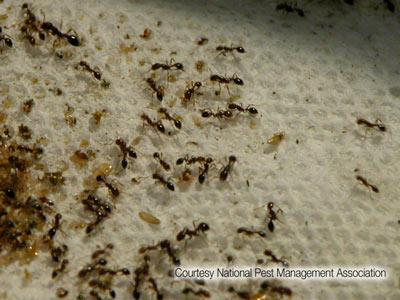 This species is thought to be native to Africa, but is currently found throughout the Unites States. Pharaoh ants feed on a variety of food sources including sweets, oils and proteins. They will also eat other dead insects.

Pharaoh ants are commonly found in commercial food handling establishments such as hotels, grocery stores and hospitals. Inside, they nest in warm, humid areas near food and water sources. Nests are usually located in inaccessible areas such as wall voids, behind baseboards, in furniture and under floors. These ants often use electrical and telephone wires as a highway system to travel through walls and between floorboards.

Pharaoh ants have been implicated in the spread of more than a dozen disease pathogens including salmonella and Streptococcus pyogenes. They are notorious for being a major nuisance in hospitals where they can enter wounds, enter IV bottles and can sometimes even seek moisture from the mouths of sleeping patients.