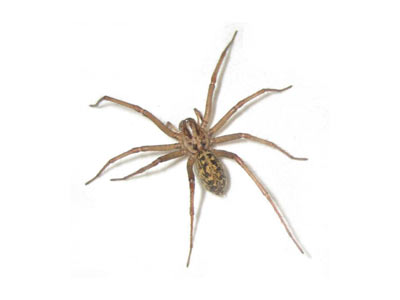 The hobo spider is native to Europe and was introduced into the Pacific Northwest in the 1930's and has expanded its range south and east. Originally, the hobo spider was named "the aggressive house spider," which originated from an incorrect interpretation of its species name-agrestis-which means "of the field or land."

Hobo spiders frequent areas such as log or timber piles, rock piles, retaining walls, holes, or where tall grass meets the foundation or crevices in soil or concrete. Their webs are funnel shaped and really wide at the top.

A hobo spider is poisonous and its bite can initially be painless but serious. When hobo spider poisoning is severe, it will take time to heal and may leave scarring. Following a bite there may be redness around the bite area and you can experience headache, nauseau, fatigue and vision problems.