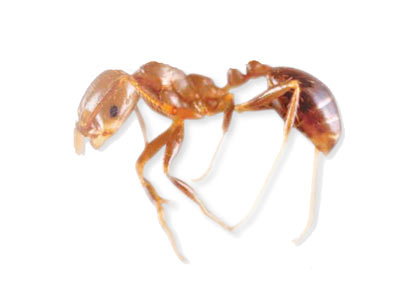 Red imported fire ants (RIFA, for short) get their common name from their ability to inflict painful bites and stings. Originally from Brazil, RIFAs were introduced to the U.S. in 1933 and are now found throughout the southern part of the country.

Red imported fire ants usually nest in soil near structural foundations or in landscaping. They build large mound nests that are flattened and irregular in shape, and between two and four square feet in size. Although these ants usually nest outdoors, they can gain access to buildings through HVAC systems and AC units, and will nest in areas of exposed soil within buildings, such as bath traps. RIFAs are commonly introduced into new areas through potted plants, shrubs and trees.

Fire ants will sting humans who disturb a nest. The sting of a RIFA is painful and often results in a raised welt that becomes a white pustule. Often, a person stung by a RIFA receives multiple painful stings from more than one of the ants. Those with allergies to insect stings will react more severely.