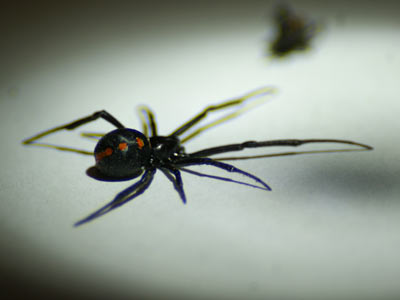 This spider gets its name from the popular belief that the female eats the male after mating, although this rarely happens in nature. Black widow spiders are most recognized for the red hourglass shape under their abdomen.

Outside, black widows commonly live in protected areas such as under stones or decks and in firewood piles, tree stumps and shrubs. They are also commonly found in barns, outhouses, sheds and barrels. Indoors, black widows prefer the undisturbed and cluttered areas of garages, basements and crawl spaces. Black widows spin irregular webs, which they usually build at night.

The biggest threat posed by black widow spiders is their bite. Males are not of concern as they lack potent venom and rarely bite, but females are known to be especially aggressive after laying, and when guarding, eggs. Pain is usually immediate, but black widow bites are not always felt. In this case, the only reliable evidence is a slight swelling with two tiny fang marks. Symptoms of a black widow bite include fever, increased blood pressure, sweating and nausea.